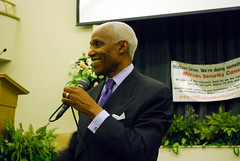 Memphians owe Mayor AC Wharton a a big thank you for taking initial action on our huge number of blighted properties.  Yesterday, Wharton filed 138 lawsuits in General Sessions court against owners of some of the City’s blighted properties.   The properties were identified by Code Enforcement and researchers at the Center for Community Building and Neighborhood Action at the University of Memphis, and Wharton promises there will be more suits against owners of multiple properties who are able to fix them up.Out of town owners are also being targeted.  The Memphis Flyer story quotes the Mayor:

“I was just looking at the addresses of some of the owners — Oxford and places like that. If it’s not good enough for the cities where they live, it’s not good enough for the city of Memphis,” he said, adding candidly, “I wish I had a way of taking some of these properties, putting them on a flatbed, and rolling them right into their neighborhoods and saying ‘We brought your house to you.’ I wonder how long their neighbors would let them stay.”

The Commercial Appeal story reported  Wharton said earlier that the city would file hundreds of suits against property owners, including banks with a “shadow inventory” of repossessed properties held in limbo.  Earlier this month, Channnel 3’s Keli Rabon addressed the issue and the economic impact on the city which touches on the shadow inventory situation. It will be interesting to see, if it can be sorted out, how many of Memphis’ blighted are actually owned by banks who have foreclosed but never taken title to the property, allowing them to evade taxes until they are caught or dispose of the property.  I hope Memphis’ tenacious investigative keep following up on this story.  I think we will all be surprised at who the real culprits are. What do you think? Leave your comments. Cancel reply

This site uses Akismet to reduce spam. Learn how your comment data is processed. Dwayne Butcher
05:00 02 Aug 18
Thanks, Joe for being such a great help in buying our condo!If you are considering buying or... selling in Memphis, give Joe Spake a try. He knows what he is doing, knows all the people, knows all the tricks, and is very honest with you. Sometimes telling you things you may not want to hear. Joe makes the buying process easy, explains every detail along the way, so you know exactly where you are in the process. Thanks again, Joe!read more